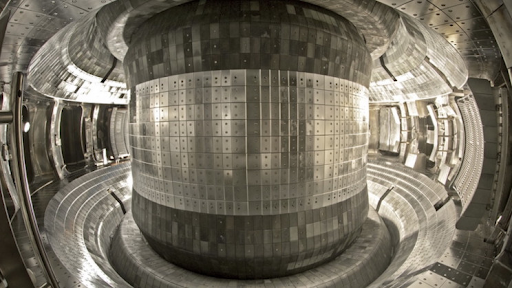 China's "artificial sun", a nuclear fusion tokamak reactor that could provide almost limitless amounts of emission-free energy, set a new record on Thursday by running for 1,056 seconds at high plasma temperature, according to a report from Xinhua.

The particular tokamak reactor is called EAST, which stands for Experimental Advanced Superconducting Tokamak. It is located in Hefei, China, and it also broke a record in May when it ran for 101 seconds at a temperature of 216 million°F (120 million°C).

EAST is one of several nuclear fusion experiments around the globe designed to mimic the reaction of the sun and stars using tokamak reactors. Nuclear fusion occurs when two atoms smash together to form a heavier nucleus, releasing massive amounts of energy. By harnessing this power, several high-profile experiments hope to provide enough energy to end the world's reliance on fossil fuels.

Other nuclear fusion experiments include MIT's Bill Gates-backed SPARC and South Korea's KSTAR, which recently broke a record by maintaining super-hot plasma at one million degrees for 30 seconds. According to CGTN, the EAST experiment has reached several key milestones towards viable nuclear fusion. These include achieving a 1-million-ampere current, and producing a 1,000-second duration 100-million-degree temperature. Now the EAST engineers have to achieve these two targets at the same time.

The race towards net fusion energy

To achieve viable nuclear fusion, researchers must show they can produce more energy than fusion reactors require to run in the first place. So far this has not been possible, though key breakthroughs in recent months and years are bringing the scientific community closer to achieving the monumental milestone. In September, for example, the Bill Gates-backed SPARC experiment runner, Commonwealth Fusion Systems, announced that it successfully tested a magnet that could run at 20 teslas in magnetic strength while only consuming about 30 watts of energy.

Such breakthroughs will allow the scientific community to gradually improve the efficiency of these "artificial suns", reducing the immense power required to run them in the first place. In doing so, they may unlock net fusion energy here on Earth.

Popular posts from this blog

Information about all the vaccines

January 08, 2022
About allthevaccines.org https://allthevaccines.org/ This website is an attempt to centralise information on all human vaccines. Data is sourced from websites linked on each vaccine page. We aim to track all vaccines in the Western world, or at least those which are actively manufactured. Much effort has been made to verify all info presented but zero guarantees are made. Similar vaccine list data can be found at: Wikipedia: List of human vaccines WHO: Prequalified vaccines FDA: Vaccines Licensed for Use in the United States NHS: Vaccinations Ontario's Routine Immunization Schedule This website contains no medical advice. No warranties of any kind, express or implied, are made. The operators of this website shall not be liable to any claim, damages or other liability arising from, out of or in connection with it. allthevaccines.org is open source software. Source code licensed under the  MIT License  and available on  sr.ht  and  GitHub .
Post a Comment
Read more